Wayne at a Holy Spirit Conference in New Zealand

Sally ministering on an altar call in New Zealand

Sally ministering at a conference in New Zealand

Sally at a women’s conference in Uganda

Sally with Senior Pastors in Rwanda

Sally at a village meeting in Mozambique

Wayne giving out Bibles in Ethiopia 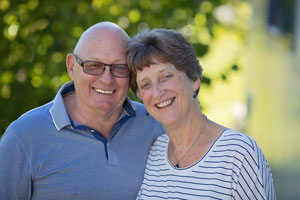 Bringing Revival and Refreshing to the Body of Christ

Miracle Ministries was established in 1996 after an outpouring of the Holy Spirit in Christchurch, New Zealand. It was formed by a team of committed men and women, led by Sally Cowie, who had all been freshly impacted by the power of God. Their mandate was to listen to the Holy Spirit and do what He led them to do. This resulted in Miracle Ministries meetings being held locally, nationally and internationally, bringing revival and refreshing to the body of Christ over many years.

Listen to the Holy Spirit and Obey

In 2011, Sally married Wayne Curham and now they minister together. Wayne has brought a new dimension to the Miracle Ministries' team. The mandate remains the same. Listen to the Holy Spirit and obey. Already they have ministered both locally and internationally. They carry a passion to see people's lives transformed by encountering the presence and power of God and to see them equipped to impact their world with the Gospel.

In January 2015 the Holy Spirit clearly indicated that we were to concentrate our ministry in our own nation for a season. We remain open to the Holy Spirit to redirect us again to the nations in His timing.

He especially emphasised small towns and cities to us. We reluctantly cancelled our overseas engagements. Since then we have had the privilege of ministering in both the North Island and South Island seeing the Lord bringing transformation to individuals and in some cases churches as well.

We had another surprise in January 2018 when the Holy Spirit challenged us with the need to see prayer increase in the nation both individually and corporately.

In April 2018 we attended the Christchurch New Zealand and Beyond conference where Tak Bhana spoke on the need to prioritise prayer. He made this statement: “The greatest awakening we need is an awakening in prayer.” This so confirmed the Lord's word to us.

As we have had opportunity to minister this year we have spoken on prayer, led in prayer asking the Holy Spirit to anoint us to intercede. After one such prayer time a lady commented, “Well, that was fun!”  After a Sunday morning service a leader said, “Prayer will increase exponentially after that message!”

What a joy to believe that God's house, His church in New Zealand, would indeed be a “house of prayer.”

Prayer is on the increase in our nation and we are delighted to be a part of it. Prayer, revival and mission go hand in hand. History tells us that any significant outpouring is preceded by fervent prayer.

If we can further equip and encourage your church in the area of prayer please contact us.

Wayne and Sally Curham will prayerfully consider any call to minister in New Zealand. They are available to minister at church meetings, conferences, camps and especially revival meetings. They carry a passion to see people's lives transformed by encountering the presence and power of God and to see them equipped to impact their world with the Gospel.

Sally and Wayne are credentialled ministers of the New Life Churches International and associate ministers of Living Waters Christian Centre, the church that they attend.